With family roots in Gaelic speaking Donegal, London-born MAGGIE BOYLE has become one of the most prominent Anglo-Irish standard bearers of the musical traditions of her ancestors’ homeland. An accomplished flautist and bodhran player, her voice, in the words of Bert Jansch, has a “spellbinding, intoxicating quality.”


Her many years on the club and festival circuit have brought her into contact with many contemporary songwriters, whose work she often pays homage to in her recordings and live performances.


She provided the soundtracks of the highly regarded films Patriot Games and Legends of the Fall, as well as productions by the Rambert Dance Company. An impressive list of those with whom she has worked includes The Chieftains, Incantation, Bert Jansch, Steve Tilston, Peter Bellamy and John Renbourn. Her latest collaboration is with the sublimely gifted guitarist PAUL DOWNES, with whom she will be appearing at The Lord Nelson on August 5th. 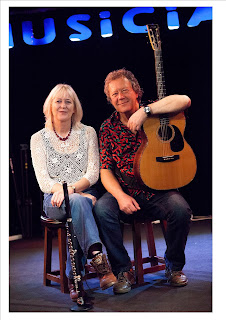 Her most recent album, Won’t You Come Away was described by fRoots as “... authoritatively considered, with the abundant expressive sincerity which distinguishes Maggie's performances….central to the texture is the unflinchingly expert guitar of Paul Downes.”
Posted by Brighton Acoustic Session at 04:00