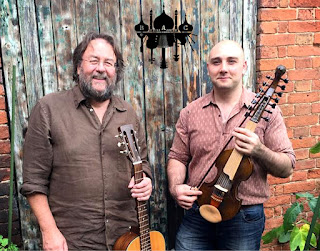 John Dipper and James Patterson will weave a rich tapestry of tunes & songs from the English tradition, infused with a musicality and thoughtfulness only found in musicians of their calibre.
​
John, brought up in the Wiltshire home of performing and instrument making parents, has been playing fiddle for as long as he can recall. Widely regarded as one of the finest English fiddlers he has worked as part of the English Acoustic Collective, Alma, The Emily Askew Band and many others.

James started singing in folk clubs whilst still a student in London in the early 1970s. He worked with the late Ralph Jordan in Silas, Crows and Patterson, Jordan, Dipper and has continued his musical explorations with John since Ralph’s death. James has also recently worked in the revived line up of Crows.
Posted by TEvans at 15:30

Hi Very Nice Blog. I Have Read Your Post. It Is Very Informative And Useful Thanks For Posting And Sharing With Us And Your Writing Style Is Very Nice.
psaltery