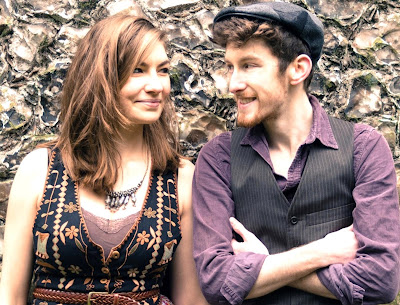 Rosie Hodgson was a finalist for the BBC Radio 2 Young Folk Award and is also the lead singer for Irish band Crossharbour, described by the Irish Times as “formidable” and by the Daily Telegraph as, "A fine example of how traditional Irish music is thriving in a modern way."

“Her voice possesses a naturalness and maturity, bringing a ruby-richness to lyrics new and old.”    - Folk Radio UK

Rowan Piggott grew up in Co. Galway Ireland, surrounded by traditional music  -  his father Charlie was founder the legendary De Dannan. He studied classical violin and trained as a chorister before undertaking a diploma in Jazz at Trinity College of Music.

"Rosie & Rowan are at the forefront of the modern folk scene individually; together they form a powerful partnership that will surely accelerate their rise to the top. Songs crafted of the highest quality, sensitively delivered with haunting harmonies and a cheeky smile!"  - Heard And Seen

Posted by Brighton Acoustic Session at 01:12